This past Sunday evening, I had the privilege to attend a lecture, given by an incredible woman – Marthe Cohn. Not only did she live through the Nazis occupation of France, but she was a spy for the French Army. Being fluent in German, she assumed the identity of a German nurse and claimed she was searching for her missing fiancee. She told her daring story of spying on the Germans. At learning valuable information, she walked through the night, in the snow, to get the information to the French. She was able to prevent the ambush the Germans had planned in the Black Forest.

After the war, she was given many awards. Some of which included: 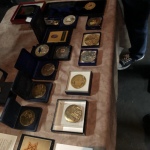 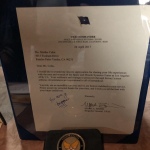 I bought and read her book before going to see her and it is just an amazing story to read. For anyone interested it is: “Behind Enemy Lines: The True Story of a French Jewish Spy in Nazi Germany.”

I feel it is important for people to remember what happen all those years ago and to pay their respects to the people that fought for what was right. Marthe Cohn is a remarkable woman and people should hear her story.

I hope this inspires you to read her book and spend some time reflecting on the brave women in history that fought for others.